Filming has stopped for a week. We're well over half way. And I think the film will be good. Everyone breathe out.

It's an odd process, rather like viewing lots of individual pieces of a jigsaw out of order and trying to figure out if when you put them all together you've going to end up with a picture of the Sistine Chapel Ceiling, or a picture of a tennis playing lady scratching her arse. I think we're far from Arseland. (Way to damn with faint praise there Jamie.)

The cast rock. Anna Faris glows. The gags work. The paradoxes make your head spin. Everyone on set is working their arses off to make this as good as it can be.

I was being interviewed for publicity purposes, and asked to give a reason, in one line, why people should go and see the film.

I said "Because it will mess with your head. In a good way."

For my own amusement, I was trying to think of a nice analogy for the film. What I eventually came up with was this:

On one stage you have the biggest glitzy extravaganza the world has ever seen; dancing girls, elephants, fire-breathing trapeze artists, with incredible dazzling pyrotechnics and costume changes every thirty seconds. And it's too much. The performers smiles seem fixed and false, going through the motions, a needy child screaming for your attention with nothing to say. The audience is restless and they don't know why. Surely the more stuff happening on stage, the better?

On another stage you have a lone spotlit man, juggling with three balls. That's all. But the man manages to pull off incredible tricks within his self imposed limits. He could have set the balls on fire, or juggled chainsaws, but he knew that if he did it right, all he needed was balls.

All you need is balls.

If FAQATT were a stage performer, it would be this guy:


Merry Christmas.
Posted by Jamie Mathieson at 10:36 AM 3 comments:

This is partly my first attempt to embed a YouTube video, partly a plot/vibe clue to FAQATT and partly just sharing one of my favourite videos of all time; Bjork and Gondry's Bachelorette:

Posted by Jamie Mathieson at 8:21 PM No comments:

My brother and his friend came visiting the set yesterday. As he himself put it, his "film set awe" lasted the whole day.

His presence got me thinking about the origins of my story-telling drive, one of the roots of which is the practice of telling him stories when we were both children. I used to ad-lib wish fulfilment stories to him along the lines of "You're in the woods when you notice a hatchway in a tree which leads down to a secret underground base with a magic belt that turns you into a superhero. There is also a room filled with gold."

This was always great fun, the biggest thrill for me being his excitement at each fresh revelation as I came up with it. He would also suggest twists or new story elements as I went along, which I would gamely attempt to weave into the narrative.

And here I am, nearly thirty years later, gamely attempting to incorporate script notes into a screenplay and waiting for the audience's collective face to light up. Only I'm no longer sitting on a bunk bed or wearing all in one Robin Hood pyjamas.

Posted by Jamie Mathieson at 7:27 PM No comments:

For obvious reasons I can't go into the plot of FAQATT at this stage. This might change, but we've a long way to go before release, so let's pace ourselves. However, I do want to give some exclusive content to the literally dozens of people who are reading my blog.

I thought I could bang on a little about my influences, which will hopefully give people an idea of the zone we're playing in without giving away the shop.

Okay. Off the bat, the film is what I like to think of as "kitchen sink fantasy" (a term which I am hoping will enter into the lexicon of science fiction and fantasy lore. I am nothing if not ambitious).

My definition of "kitchen sink fantasy" is a genre story in which ordinary people find themselves in extraordinary situations, but can't stop behaving like ordinary people, for hopefully comic effect. It's the clash of the mundane concerns with the mind-blowingly otherworldly that hopefully causes the funnies.

Arthur Dent is a good example: shuffling around the Heart of Gold trying to get the computer to make him a decent cup of tea.

Which segues rather neatly into my love for The Hitchikers Guide to the Galaxy. I first read the books and saw the television series when I was about fifteen and they took my head off. I take a guilty pleasure in the fact that FAQATT has the same amount of words in the title as THGTTG. And one more syllable.

This could easily become an essay, but maybe I should end by just throwing in a list of other things I love which I feel are relevant to the film; Alan Moore, Sleuth, The Back to the Future series, Terminator 1 and 2, Philip K Dick, Frasier, The Likely Lads, Terry Pratchett, Kurt Vonnegut, 2000 a.d.

I hope that's given people something to chew over while waiting for more "real" news.
.
Posted by Jamie Mathieson at 11:12 PM 1 comment:

I had an epiphany yesterday. The realisation that my film is being made hit me like a smack in the head. I was watching them shoot a scene on the monitor when the jolt of “Oh my God I made this up in my head and there are now dozens of people scurrying around making it real” occurred. You would assume, no doubt, that it was a pivotal moment, a vital shot that summed up the plot and/or characters. But no, it was actually a close up of some taps in a gents toilet.

Funny, that.
.
Posted by Jamie Mathieson at 4:26 PM No comments:

To celebrate the start of shooting, we bought the three male leads a gift each (Anna Faris wasn't due for a couple of weeks). I suggested getting them each a model Delorean from the Back to the Future series - themically bang on, and BTTF is close to a lot of people's hearts on this production, including mine.

I knew that Marc would be into it, having already proven his geek credentials. I therefore ensured that he was given the cool one that flew in the second film, with wheels that swiveled downwards. I wasn't sure how Chris would feel about his gift, but Dean I felt sure would react with bemused disinterest bordering on aggression.

I wasn't let down. When I got to his dressing room, I discovered he was using it, still in it's box, to prop the door open.

We have cast very well in this film.
.
Posted by Jamie Mathieson at 5:14 PM No comments: 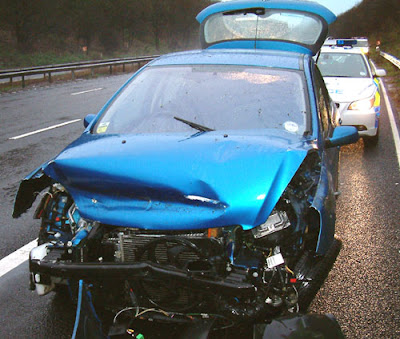 Got out, and ran across the motorway to the hard shoulder where I did a little jig because I was still alive.

Not a scratch on me. No other vehicles involved. On set within the hour with a new found respect for life and an arrogant belief in my own charmed immortality.
Posted by Jamie Mathieson at 3:30 PM 2 comments:

It stars Anna Faris (Scary Movie series) as a girl from the future, Chris O'Dowd (The IT Crowd) and Marc Wootton (Shirley Ghostman) as a couple of geeks and Dean Lennox Kelly (Shameless) as their cynical friend, who try to unravel a paradox in a British pub.

It's being directed by Gareth Carrivick (Little Britain, The Smoking Room) and written by first time writer Jamie Mathieson. That would be me then.

I'll keep this at the top of the blog for new visitors but keep checking below for regular updates.
.
Posted by Jamie Mathieson at 8:59 AM 10 comments:

While exhaustively reading every scrap of speculation on the net about FAQATT (as lazy typists everywhere are already calling the film) I came upon this snippet on Film Ick:

Jamie Mathieson is the screenwriter of Frequently Asked Questions about Time Travel, the new "three men walk into a pub"/sci-fi comedy film being produced by the beeb and HBO. Mathieson is keeping a blog, and I think it looks set to be one of the more interesting online production diaries. It's a minor - and very recently developed ambition of mine - to get a mention, and possibly link, on this blog.

See, I'm just here to make dreams come true. Picture me as a Jimmy Saville figure in a chair with a built in teasmade. (Reference to UK show from the 1980's. Do not be alarmed.)

So here's that link again. But come back soon, y'hear?
Posted by Jamie Mathieson at 1:03 AM 1 comment:

Nature abhors a vaccuum. The internet abhors a one line pitch. If no futher lines are available, they will be spun from the ether, as in this outline of FAQATT from Insomniacmania:

Anna Farris stars as hot girl (her character hasn't got a name yet) from the future in this new British sci fi comedy.

She travels back in time to answers three social outcasts questions about time travel, after a debate about the subject is started in a pub, and then time travel adventures begin.

If I was to remove all the erroneous supposition from that, we would be left with:

Anna Farris stars as a hot girl from the future in this new British sci fi comedy. She travels back in time to three social outcasts in a pub.

One site down, fifty to go.

And while we're on the topic, I love the way everyone is focusing on the whole "social outcasts" aspect of this. Maybe in the US, being a social outcast is seen as a problem. Over here, it's a badge of honour. I mean, have you been in society lately? They're eating their dead out there, man.
.
Posted by Jamie Mathieson at 12:34 AM No comments: