"That's Not Your Joke"

This is a story that dates from way back when. I was still at the "try-out spot" stage, which is stand-up terminology for doing five minutes of unpaid performance in the hope that it will lead to that far off dream of paid work. It was either 1996 or 1997.

So anyway, I went to the Edinburgh Festival, amongst other things a trade fair for comedians. I was treating it mainly as a holiday with my partner, with the vague plan of perhaps getting some try out spots while up there.

read moreAnd Lo, a try out spot did appear. It was at somewhere called the Bear Pit in the local university campus. The audience there has something of a well deserved reputation for chewing up comedians and spitting them out. At the time I knew none of this, of course. All I knew was that I had a try out spot. Hooray.

We had already booked tickets for a few proper stand up shows that day, including the great Rich Hall which left me very little leeway. We would have to watch this show then I would rush to the Uni.

All this was very much on my mind as we entered the Rich Hall gig, took the only free table, which was right at the front (did I mention I was new to this stand up lark?) and proceeded to become the focus of Rich Hall’s attention.

"Well you’re a miserable soul, there at the front. Why aren’t you smiling?" he asked me at one point.

"Because I’m here to analyse your jokes and performance technique, not laugh. And I’ve got a gig on after this which is playing on my mind."

- is what I should have said.

I didn’t, of course. I don’t remember my actual responses but they were all fairly lame. And of course, I didn’t dare mention I was a trainee stand up.

The banter back and forth continued, as myself and the missus sweated in the laser beam of his attention, when for some reason the issue of parents came up. I remembered that I already had a joke on that very topic and saw a chance to crowbar a bit of my material into the act and perhaps redeem us.

"My Mum’s a born-again Christian and my Dad’s an atheist." I said, which Rich repeated to the audience. I was primed and ready to hit him with my punchline, which was "My Dad doesn’t believe in my Mum." when Rich Hall activated his lightning brain.

"So, huh, what" said Rich Hall "Your Dad doesn’t believe in your Mum?"

Cue laughter and applause from the audience and sagging and sighing from me.

So, the Rich Hall gig over, I rushed to The Bear Pit. And had a lovely time. Mainly I think due to the fact that the act on before me died on his arse. Which I referred to, along the lines of "Well, I can only hope that you love me as much as you loved him." This kind of worked and I really won them over.

The young guy running the night, all clipboard and big can headphones seemed very impressed, so much so that he asked if I could come back for a repeat performance the very next night.

"No, no." he reassured me. "Different punters every night."

So I returned the next night and ran through the same jokes that had wowed the room the night before. And got a sullen disappointed silence from virtually the same crowd. I later discovered that they all had memberships and were there every night during the festival. They didn’t boo me off, partly I think out of respect for how well I had done the night before.

Dying, drowning, searching for a lifeline, I remembered the material about my parents.

I began: "My Mum’s a born-again Christian and my Dad’s an atheist."

At which point a voice rings out, loud and clear from the balcony:

Posted by Jamie Mathieson at 7:34 PM No comments:

When I was about nineteen I had a very brief stint working as a barman at a real ale pub. The place prided itself on selling a wide variety of specialist beers both bottled and on draft and had a constantly changing list on a blackboard of guest beers with bizarre names such as “Bishop’s Fancy” and “Dragon’s Breath” etc.

I was a terrible barman, not least due to my piss poor mental arithmetic. It was also my first job dealing with the general public. I spent most of my time behind the bar in a sweaty panic.

On one particular night the bar was heaving and I was working with another barman doing my best to serve the punters as fast as possible.

I approached one man, who requested a “B. and Dunn”. I had never heard of this brewery before but this was not unusual, given the variety of odd beers we served. I duly searched the fridge that stocked bottled imports, checked the guest beers blackboard and all the taps. I even asked the other barman if he had heard of it. No joy. Finally, defeated, I returned to the customer to get him to repeat his order.

“I’m being done.” he repeated with a frown.

It’s done. I am no longer a stand up comedian.

My last gig was on April 1st 2006 on stage at Jongleurs Birmingham.

I did twenty minutes of gags, then informed the audience that I was retiring. I explained that the watch I was wearing had a silent vibrating alarm and was very common amongst comedians, making it a very good symbol of my stand up career.

I then took out a large hammer, put the watch on the stage, and smashed it. 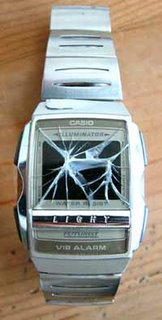 Posted by Jamie Mathieson at 3:51 PM No comments: