I am writing the third episode in season three. I report this at this late juncture as they're begun filming my episode and paid me for writing it. Which in this business is this only point at which you can be sure it's actually going to happen. Probably.

As with my experience last year, the development and writing process has been a joy. And not in a 'DVD extras, fixed grin, let's not get sued' kind of a way, but in a real, 'deep joy, wow, didn't we make something good, let's all pat each other on the back until we bleed' kind of way.

For the curious, my episode is the one where the werewolf/vampire hybrid steals the Necronomicon eggs and pollutes the water supply of Cardiff with the ghost virus.

Some of that may be untrue.

But not all of it.

(The new series is set in Cardiff.)
Posted by Jamie Mathieson at 12:15 PM No comments:

"Being Human" Read Through

I got a train from Nottingham to Bristol, where Being Human is shot. The weirdness began at Bristol train station, when I spotted Kemp, or at least Donald Sumpter, the actor that plays him. I introduced myself and he revealed something of a history with Nottingham, (where I live) having performed at the Nottingham playhouse. He was a thoroughly nice man, which proves he's an actor and not evil.

Relax, I told myself. You're a professional. You're cool with this.

It turned out that several more actors were due to arrive by train, at which point they would all be ferried onto the read through in a mini van thoughtfully provided by Touchpaper. By chance there was a spare seat for me.

Now I am not by nature a superstitious person. Nor am I one of these writers that believes that I create people as I type, breathing life into my creations by will alone. I understand that these people are simply actors, paid to pretend, in the same way that I am a writer, paid to make things up.

But here's the thing: I soon found myself sharing a mini van full of actors, playing characters I had been thinking about and inventing words for, pretty much constantly, for the past three months. For them it was no big deal, some of them knew one another – there was gossip to catch up on, old jokes to revisit. For me, however, it was like travelling along in my own head.

There was Sam (Lucy Gaskell) who's romance with George I had kindled, there was Sykes (Brain Dick), whose first words on screen I had invented, and there was Lucy (Lyndsey Marshal), who I had written a nice little flirty scene for with Mitchell. I felt like leaping to my feet and screaming “I gave you life, do you hear me? Life!” and then leaping out of the window into the road. But I didn't.

Directly in front of me, in the passenger seat, sat Paul Rhys, the actor who plays Ivan. Now his character is dangerous, unpredictable and scary. The actor himself, however, is a thoroughly nice chap, who also professed a Nottingham connection, having lived in outlying villages as a child. He turned around in his seat and spoke to me during the journey. But between us was a head rest, one of those square padded ones, like a hoop with a hole in the centre. And he was talking to me through the hole. At any one time, I could see his eye, his nose or his mouth. But never all three at the same time.

And part of my brain was making conversation and sharing knowledge of Nottingham. Chatty. Light hearted. Professional.

And another part of my brain was going: “Oh my God. It's Ivan. He's talking to me through the back of a chair.

And he knows where I live.”
Posted by Jamie Mathieson at 9:03 PM No comments:

Being Human Starts This Sunday 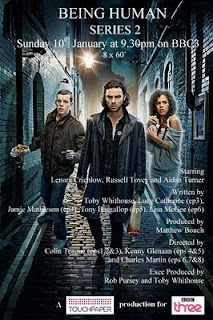 I wrote episode four. That's the one where they all swap their abilities.

I josh, of course.

Enjoy.
Posted by Jamie Mathieson at 11:57 PM No comments: