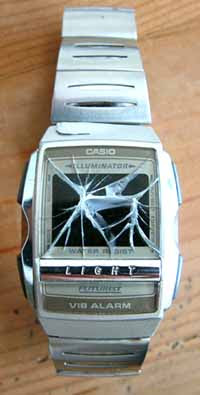 Smashed Watch
Originally uploaded by mathieson_jamie.
Well, it's been one year since I did any stand up.

April 1st last year I stood on stage and announced my retirement to an audience who didn't even know my name. Not that this is that unusual. In comedy clubs up and down the country there are comedians wowing appreciative audiences, who then file out at the end saying things like "That Irish guy at the end was pretty good."

Do I miss it? Not really.

I always used to say that if I could teleport to the gig and then teleport home, gigging would be a lovely job. The laws of physics being what they are, it's a lot of travel and a lot of waiting around for half an hour of sweaty spotlight.

Some stand-ups thrive on the sweaty spotlight bit. I never did. I was never entirely comfortable being a stand up. I tended to stick to the script. I didn't improvise well. I could never fully shake the fear that I would fuck it up and jeopardise the mortgage. Especially playing at a big chain of clubs, where a couple of really bad gigs can lose you a lot of work.

I think the only way I could ever go back now is if I was so financially comfortable that screwing up on stage wouldn’t really matter. And I'm not there yet.

So now I'm a writer. I make things up to feed myself. Which I still find funny. I love the idea of cutting out the middlemen, of trying to pay for my shopping by waxing lyrical to the shop assistant on some bizarre topic:

"Four pound fifty? Well here's a fiver's worth of speculation about futuristic nano-armour. You can keep the change."
.
Posted by Jamie Mathieson at 4:11 PM 4 comments:

This is beautiful. For those of you too busy to press play, it's a satirical cover of "The Black Eyed Peas" "My Humps" by Alanis Morissette. It has been thoroughly shown up for the abomination right thinking people always knew it to be.

And how has Ms Morissette deconstructed this beast? What clever lyrical changes has she wrought to underline the wrongness at it's core? The answer: None. She's kept the lyrics exactly as they were. Only instead of being sung as a celebration of women using borderline prostitution to gain material wealth, the lyrics are now sung as a keening lamentation of exactly the same thing.

Fucking genius.
Posted by Jamie Mathieson at 10:34 AM 1 comment: