If You Aint on Myspace, You Aint Nowhere

On stage we saw The Alternative Women’s Institute, (Myspace Page) who were composed of The Congress Of Oddities (Myspace page) Danielle Ward, (Mspc Pg) Isy Suttie (Mspc Pg) Josie Long (Mspc Pg) and Bridget Christie (NO MYSPACE PAGE – she will be DESTROYED!)

To underline the point, a mugger mugged us on the way home (that's what they do) and in the process gave us the address of his Myspace page in morse code, a slap being a dash and a kick being a dot. He took all our money and asked us to leave a review of the mugging on his comments.

I feel conflicted, as that would mean adding him to my friends. And I know that technically, friends on Myspace don’t have to be real friends, but I draw the line at someone who has terrorised and mugged me.

For those of you at all alarmed that I am making light of a real mugging incident, I am not. The mugging story is a lie. You may now breathe out.

The comedy night itself was fun, and I found myself remembering how comedy could be. Experimental and filled with flights of fancy, rather than a production line of set-up/pay-off. When I wasn't laughing I had a big smile on my face. I even found myself fleetingly thinking I could go back to it, be reborn after a year off, which it will be in April.

Then I remembered the traveling and loneliness and thought, nah.

And for those of you wondering, my Myspace page is here. But I never update it and it only serves to entice people here really. So why bother going there?
.
Posted by Jamie Mathieson at 10:32 PM 2 comments:

broken clock
Originally uploaded by ananasbacke.
I am a writer. That is now where all my money comes from, rearranging words and letters and selling these specific arrangements to other people, who say things like “Those words in that order! We could never have rearranged them like that!”

It wasn’t always this way. I did a lot of “normal” nine-to-five work on the twisty turny road that lead me here. And in my spare time, and sometimes even when supposedly at work, I wasted a lot of time. I watched a lot of TV, played a lot of computer games and read a lot of comics.

However, now that I am a writer, I can retroactively re-categorise much of this time wasting as research;

Lying on the sofa in my underpants for that three hour Simpsons marathon? Research. Reading the text files of Edgar Rice Burroughs Tarzan books while supposedly processing customer service complaints for Royal Mail? Sticking it to the man. And research. Playing Counter-Strike until I viewed every dustbin on my street as potential cover? Research.

Obviously, had I never become a creative of any sort, this would all have remained time wasted. Now it’s all grist to the creative mill. Even striking out in my teens is valuable raw material.

If I ever have to write a script about a teen striking out.
Posted by Jamie Mathieson at 7:11 PM 1 comment:

It's a bit of a lazy man's post to just embed a YouTube video, but I enjoyed this so much I had to share. I hope you do too. 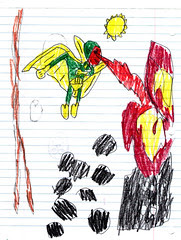 vision
Originally uploaded by Ape Lad.
I am starting to pick up more and more returning visitors to this blog. And I don't want to let you guys down - every time you open this box there should be something new and interesting inside, so I am going to try and start writing more frequently.

Here's a story I don't think I've ever told the world, and should tell you all you need to know about me:

When I was young - and we're talking under the age of seven here, I was convinced that if you wished for something hard enough, it would occur. This was one of my more reasonable beliefs at this age. On the day in question, I decided that I wanted to have the superpowers of "The Vision", a lesser known Marvel superhero. (His Wikipedia entry is here, for those of you that really care. And who wouldn't?)

One of the key things about The Vision was his ability to change the density of his body - he could become as hard as diamond, or as ethereal as mist. This mist thing was the bit I was keen on - for then I could walk through walls, just like The Vision. Quite why this appealed to me so much at this age is lost in the mists of decayed synapse pathways. And gin.

Imagine my surprise when I bounced off.

Now I am sure that most children at this point would realise the folly of this whole wish/superpower belief system and move one step closer to the healthy cynicism of adulthood.

Not me though. Oh no.

I came to the conclusion that my wishing system was working just fine. It was the execution of my super powers that needed work.

Put simply, I needed a run-up.

And the moral of the story? I don't know. Pick one. Something about futility, or the power of imagination, or the folly of youth. Something like that. Knock yourself out.

With at least twenty years between photos. Same people, same garden. We would have been in the exact same position but they'd gone and built a pond there.

Me and my brother on the right, my two cousins on the left. Guess who are the crazies and who are the straights...

I love my little brother's Nosferatu face as a child.
Posted by Jamie Mathieson at 5:18 PM 3 comments:

NSFW - but very funny. It's like they looked at my life and put it right up there on the screen.