I am adapting the comic Hotwire into a film script.

Hotwire began life as a Warren Ellis outline, which Steve Pugh wrestled into life, doing pretty much everything else. I've met Steve and he's a lovely bloke. His site can be found here, with some pix of Hotwire.

The premise in a nutshell is a world where spirits can no longer cross over and hang around, like ectoplasmic pollution. The titular Hotwire is a police exorcist with an ass kicking attitude and a spiked blonde crop.

It's so far up my alley I'll need a doctor to get it out again. And odd – I have a shelf full of Warren Ellis stuff, have a bit of Steve Pugh, and hope one day to branch into comics, yet here I am, interpreting one of their nuggets into another form. Odd the way the business works. And very, very cool.
Posted by Jamie Mathieson at 2:31 PM No comments: 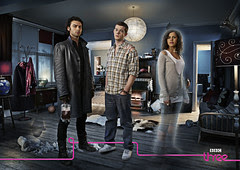 BEING HUMAN
Originally uploaded by BBCTHREE
I am writing an episode of Being Human.

For those of you who don't know what this is, it's basically the current jewel in the crown of BBC 3 and you can read all about it here. In a nutshell, it's a flatshare drama with a difference, namely that the flatmates are a vampire, a werewolf and a ghost. And laughable though the premise sounds, it works. Very well indeed.

It was an honour to be asked. I'd auditioned for season one, failed, forgotten all about it, then got offered an episode of season two. This was partly, I understand, in response to another fantasy spec script that I wrote that was floating around the various production companies of London. It didn't get commissioned, but it's more than paid for the time it took me to write it in getting me this gig.

Obviously, it's nothing that I can divulge here. But in the wake of my episode I'm expecting nothing less than a BAFTA. I also expect to be given Toby's job when he passes on the Being Human torch, in the manner of Russell T Davies passing on Dr Who to Steven Moffat. My episode will be that good.

And if it isn't, I will blame everyone else, from the actors to the tea lady on set. For I am a writer and that's what we do.
Posted by Jamie Mathieson at 2:25 PM No comments: