Alan Moore on the phone to Zack Snyder 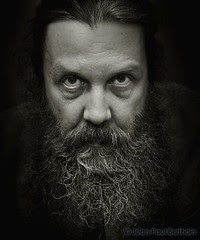 Alan Moore
Originally uploaded by whatisanimagetoyou
Z) Hi Alan. Such a buzz to finally speak to you. I just want you to know we're going to do everything we can to adapt Watchmen as faithfully as possible.

Z) Just a couple of things I wanted to pick your brains over.

Z) Who would win a fight between Superman and Dr Manhattan?

A) I think you're missing the point of the character. Dr Manhattan is more of a meditation on superhero as God, with limitless power but also a godlike moral detachment due to his quantum perspective -

Z) He'd so kick Superman's ass. I'm right, aren't I? I mean he wins the Vietnam war on his own! Blowing up all the gooks. Boom! He's like a giant blue Rambo.

Z) And Nite Owl versus Batman? That's gotta be a close one.

A) Again, that's not what the character is about. He's a retired middle aged man with a pot belly who can only get it up when he wears his costume -

Z) Alan, Alan, Alan. You have seen 300? I don't do pot bellies, mo fo. I was thinking more of a kind of lean mean ass kicker. Pow! Like, I want to extend the Rorschach prison break-out sequence to give Nite Owl and the Spandex Spectre a chance to really throw some moves.

Z) Yeah. We've renamed the Silk Spectre. See, her name didn't make any sense any more, after we took all the silk from her outfit -

Z) Marketing thought silk was too pervy. So we replaced it with spandex and leather.

(All of the above is, of course, satire. I am no way implying that Alan Moore has ever spoken to Zack Snyder, nor ever will.)

.
Posted by Jamie Mathieson at 9:39 PM No comments: