Will You Be My Friend?

Today I had a man on Myspace send me a friend request. He already has 24,000. I turned him down. It would have felt cheap.

To Spec or not to Spec 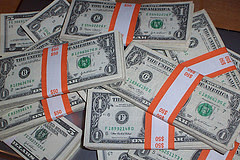 MONEY IS SHIT
Originally uploaded by cashmoney_4real.
I don't think I am unique in writing scripts on spec (for those of you not in the business, spec is short for "speculative" which essentially means no-one has paid you or asked for the script, you just thought it was a good idea and wanted to write it) but there seems to be a growing trend of writers pushing for commissions and payment before they write a word of anything, usually based on a few page outline or pitch document.

I am not keen on this approach for a few reasons. Firstly, the idea of trying to expand an "approved" outline brings along with it a whole set of pressures which simply don't exist if you're off on your own, plotting territory in the undiscovered landscape of a new script. For one thing, you've already been paid to finish the damn thing.

If you're working on something speculatively, the option always exists to just shrug and go "Screw it, this isn't working." and put it to one side. Not so if the money is already in your account. You're contractually obliged to hand something in, even if you have to wrestle the story to the finishing line.
.
Posted by Jamie Mathieson at 8:58 PM 1 comment:

I have written a new film. Nearly 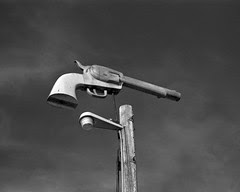 Gun
Originally uploaded by efo.
In the format of Final Draft, my screenwriting program of choice, one page equals one minute. I have just reached page ninety of a brand new screenplay that I began exactly one month ago. This blog entry is my limp virtual version of popping a champagne cork. The script isn't finished, not by a long chalk, but it's an hour and a half long, which is a film. And just to be clear, that's ninety pages that I am happy with, rather than ninety pages that need rewriting.

I tend to rewrite a lot, and habitually cut rejected sequences or dialogue and paste the rejected bits at the foot of the document. The current document is 141 pages long. The mathematically minded amongst you will realise that this means that I have 51 pages of trash stuck to the bottom of the "approved" stuff. I am telling you this merely to give an insight into my wasteful and ill-judged working practices.

I can't tell you what the script is about, but I am very excited by it. This was partly an exercise in pushing myself. I had the idea for the film on 10th April and just wanted to get the script written and the film out there as fast as possible. At this rate, it should be with my agents and encouraging ferocious bidding wars within the next month.