Frank Skinner In My Episode Of Doctor Who 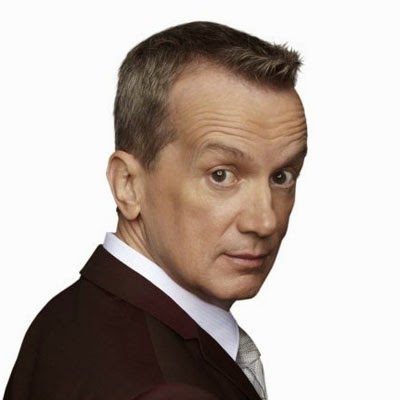 So, Frank Skinner is in my episode. Which is very cool.

I was a stand up for a living for quite a few years. When I was trying to figure out how to do it in 1996, his first two stand up videos were part of my boot camp, so there is a nice synchronicity for me to be writing lines for him to deliver nearly twenty years later.

And we'll chat some more, like old friends meeting again, our time on the circuit giving us a shared language, a common bond. Soldiers from different fronts of the same war. The war that every comedian fights – the war on sad faces.

And when we finally part, we will be firm friends, with plans in place to meet again and maybe work on something together. But then the number he gave me doesn't work and when I try to reach him through his agent I am given the runaround. But a friend of a friend knows where he lives so I go and visit him and he explains that he gave me an old number. And we laugh about the silly mistake and we hold hands and spin around in a circle laughing until we get dizzy.

Yeah. I imagine that's pretty much how it will go.
Posted by Jamie Mathieson at 1:12 PM